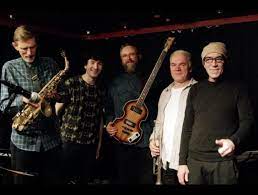 Zone-B is the new group led by the highly acclaimed frontline combination of Steve Buckley and Chris Batchelor. Their playing partnership has been a long and fruitful one that started even before the formation of the critically acclaimed Loose Tubes in the 1980s of which they were among the founder members.

They have had several influential albums as co-leaders, including the groundbreaking multi-track recording Life As We Know It. The transatlantic group Big Air that they subsequently formed with Myra Melford, Jim Black, and Oren Marshall in 2002 received universal critical acclaim and their CD was described as “the best British jazz record for 20 years” by Brian Morton in Jazz Journal.

In Zone-B, Buckley and Batchelor have joined forces with the world-class rhythm section of Rob Luft, Tom Herbert, and Gene Calderazzo to present fiery and soulful original music inspired by the range and depth of the musical experiences they have enjoyed together.