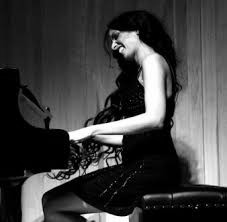 One of the brightest stars on the contemporary jazz scene

Described in The Observer as “a remarkable pianist by any standard”, Zoe Rahman has firmly established herself as one of the brightest stars on the contemporary jazz scene. A vibrant and highly individual pianist/composer, her style is deeply rooted in jazz yet it reflects her classical background, British/Bengali heritage and her very broad musical taste. Known for her powerful technique, wide-ranging imagination and exuberant performance, she has become a highly sought-after musician, working most recently with the likes of George Mraz, Courtney Pine and Jerry Dammers’ Spatial AKA Orchestra.

Born in Chichester, UK, to a Bengali father and English mother, Zoe studied classical piano at the Royal Academy of Music, took a music degree at Oxford University and then won a scholarship to study jazz performance at Berklee College of Music, Boston, where she studied with the inspirational pianist JoAnne Brackeen.

Zoe won a MOBO Award (best Jazz Act 2012) for “Kindred Spirits”, her fifth album on her own Manushi label. The album showcases Zoe’s exuberant and highly personal style. Featuring her brother Idris on clarinet alongside her trio as well as a guest appearance by UK jazz legend Courtney Pine, the album has been hailed as a ‘masterpiece’ (Manchester Evening News), ’in every way a five star rating’ (ukjazzradio.com), ‘one of the best albums of the last couple of years’ (Jazzwise), and ‘a work of breathtaking musical imagination’ (Metro).

Zoe’s second album, Melting Pot, was nominated in 2006 for one of the UK’s most prestigious music awards, the Nationwide Mercury Prize, alongside the likes of Thom Yorke (Radiohead), Arctic Monkeys and Muse, and it also won ‘Jazz Album of the Year’ at the UK’s first Parliamentary Jazz Awards.

Her fourth album, Where Rivers Meet, is a stunning collaboration with her brother Idris, exploring music from their Bengali heritage, which creates “a wholly original brand of Anglo-Asian music” (Sunday Times).

She has been a featured artist on numerous TV and radio programmes and is frequently invited to sit on high-profile panels – most notably, the Mercury Music Prize, BBC Young Jazz Musician of the Year, Nottingham International Jazz Piano competition. She shares her passion for music through teaching in a variety of contexts, inspiring musicians of all ages and abilities. From 2013-14 she was Artist in Residence with youth big band “Jazz Vehicle” in Lincoln.