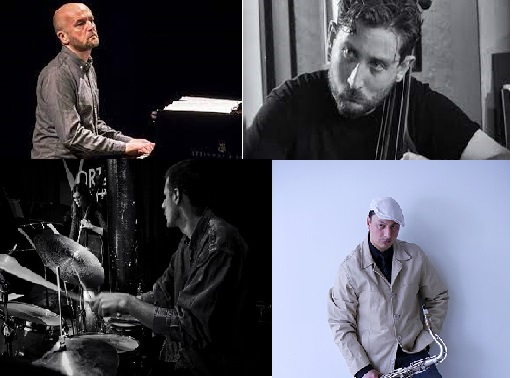 The band will be playing mostly standards with maybe a few of Dave Storey’s compositions.

Dave Storey has established himself as one of the leading drummers and first call sidemen on the London jazz scene. He is well known for his big sound on the drums and his work as a bandleader releasing two albums for Impossible Ark as the Dave Storey Trio featuring James Allsopp & Conor Chaplin.

For this special date Dave will be bringing together a formidable group of musicians for an evening brimming with fire and creativity:

Alex Garnett has been one of the leading saxophonists in the UK and Mainland Europe for over two decades, being instantly recognised by his dark, husky sound. A versatile musician and first call sideman he has enjoyed success as both a jazz artist, composer and arranger, and an in demand session, studio and commercial saxophonist, having racked up countless recording credits along the way.

Liam Noble has become one of the most influential pianists in UK jazz since leaving the Guildhall in 1999. Liam has worked towards developing a personal style formed from his experience playing everything from standards, new compositions, free improvisation and, most recently, electronics.

Ferg Ireland is one of London’s most versatile and in demand bassist. Whether playing behind some of the biggest Pop Artists in the world (Sam Smith/Gregory Porter), performing with US Jazz legends (Jason Marsalis/Johnny O Neal), or appearing with many of the UK’s best Jazz musicians (Kansas Smittys/Soweto Kinch).