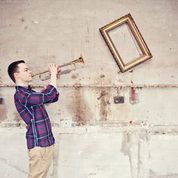 Sean Gibbs is a jazz trumpet player and composer/arranger hailing from Edinburgh. After growing up playing with ensembles such as The Tommy Smith Youth Jazz Orchestra and The National Youth Jazz Orchestra of Scotland, he enrolled on the jazz course at Birmingham Conservatoire. He graduated from the course with first class honours in 2015, winning the BMus Jazz prize. During his time at the conservatoire, he studied with renowned trumpet players Percy Pursglove and Richard Iles, alongside many guest artists, including Mark Turner, Kenny Garrett, Maria Schneider, Joe Lovano, Dave Holland and John Taylor.

Sean is now resident in London, and in demand as a performer across the UK and abroad. He leads his own quintet, featuring Riley Stone-Lonergan (tenor saxophone), Rob Brockway (piano), Calum Gourlay (bass) and Jay Davis (drums). They released their debut album, When Can I See You Again?, with Ubuntu Music on 13th August 2021. His previous band Fervour were awarded funding from Arts Council England to record and tour their critically acclaimed album Taking Flight in 2018. Sean is also a member of the Scottish National Jazz Orchestra (with which he has performed with guest soloists such as Kurt Elling, Joe Locke, Kenny Washington, Martin Taylor, Jazzmeia Horn, Bill Evans, Makoto Ozone and Mike Mainieri), rock induced brass band Young Pilgrims, the Calum Gourlay Big Band, the Mike Fletcher Jazz Orchestra, the Martin Kershaw Octet and Paul Towndrow’s Keywork Orchestra. As a freelance musician, Sean has performed with Jim Rattigan’s Pavillon, Eliza Carthy’s Wayward Band and Chris Dean’s Syd Lawrence Orchestra to name but a few.