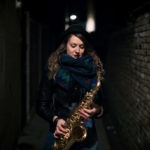 Originally from the Shetland Islands and now based in London, Rachael Cohen is an alto saxophonist and composer on the rise with an infectious tone and an uncanny storytelling ability. Over the past few years, her live performances and composing skills have gained her great attention from the UK jazz press & community. One of Cohen’s strongest attributes is her lyrical and controlled phrasing when improvising which she delivers with the ease and sophistication of someone twice her age. Rachael continues to work extensively across the UK with her own projects and has come to be a mainstay at London clubs such as Ronnie Scott’s and the Vortex as well as having her residencies at other clubs throughout London.

Will Barry is a pianist, drummer and percussionist from London who graduated from the Royal Academy of Music in 2016. He is part of numerous projects internationally, most prominently touring with Phronesis bassist Jasper Høiby’s group ‘Fellow Creatures’ in Turkey, Belgium, Germany, Switzerland, Austria, Denmark, Holland and also extensively in the UK.  In the last few years Will has performed at the North Sea, Love Supreme, Green Hours and Umbria Jazz Festivals.

Ferg Ireland is one of London’s most versatile and in demand Bassists. Whether playing behind some of the biggest Pop Artists in the world (Sam Smith/Gregory Porter/James Bay/Dave/Marcus Mumford) , performing with US Jazz legends (Jason Marsalis/Johnny O Neal/Leroy Jones), or appearing with many of the UK’s best Jazz musicians (Kansas Smittys/Soweto Kinch/Ashley Henry/Empirical/22A and many more) “…his playing throughout illustrates why he’s so in demand; with a simply awesome if unorthodox technique put in the service of a powerfully individual musical imagination, simultaneously grounding the harmony and sending it into unexpected directions.”-Jazzwise Magazine

In demand US drummer, Jason Brown, has been a driving force behind major artists since the early days of his career. A graduate of Oberlin Conservatory, Ohio; Brown learned his trade under the tutelage of Billy Hart.For seven years he toured and recorded with Grammy nominated vocalist & composer, Carmen Lundy; with Pat Martino he appeared at major festivals worldwide, such as Jarasum International Jazz Festival and Rochester Jazz Festival. He has also worked with renowned artists such as Lizz Wright, Cedar Walton, Nicholas Payton, Wayne Escoffery and Kurt Rosenwinkel