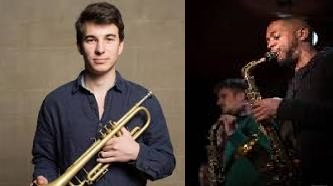 Miguel Gorodi is a London based trumpet player, composer and teacher working across a broad spectrum of jazz and improvised music. He leads several ensembles playing music that reflects his interests in contemporary and traditional ideas in Jazz. Gorodi released his debut album Apophenia on Ubuntu in 2019 featuring his original compositions for Nonet.  His versatility has seen him work across many styles of music with musicians and projects such as Ian Shaw, Jamie Callum, BBC Big Band, Barry Green, SEED Ensemble, Yazz Ahmed, Femi Temowo, The London Jazz Orchestra, Smitty’s House Band, London City Big Band, Hackney Colliery Band, The Ticklers, Riot Jazz and many others. He has performed in Spain, France, Belgium, Germany, Italy, Switzerland, Norway, Hungary, Ireland, Russia, Monaco and across the UK.

Nathaniel Facey,One of the UK’s finest and most exciting saxophonists, Nathaniel Facey has been a prominent figure on the European jazz scene for over a decade, and has worked with the likes of Jack DeJohnette and Jason Moran. A truly unique sound that, while reminiscent of giants such as Charlie Parker, Eric Dolphy, and John Coltrane, is undeniably his own; full of ferocious passion and lyrical mastery. A founding member of the multi award-winning group Empirical that have toured the world, audiences are constantly blown away by Facey’s command over his instrument and the stage. He is undoubtably always one to watch, whatever line-up he is involved with, and is sure to bring an intensity that is rarely seen in musicians.

Ferg Ireland is one of London’s most versatile and in demand Bassists. Whether playing behind some of the biggest Pop Artists in the world (Sam Smith/Gregory Porter/James Bay/Dave/Marcus Mumford) , performing with US Jazz legends (Jason Marsalis/Johnny O Neal/Leroy Jones), or appearing with many of the UK’s best Jazz musicians (Kansas Smittys/Soweto Kinch/Ashley Henry/Empirical/22A and many more) “…his playing throughout illustrates why he’s so in demand; with a simply awesome if unorthodox technique put in the service of a powerfully individual musical imagination, simultaneously grounding the harmony and sending it into unexpected directions.”-Jazzwise Magazine

Will Glaser, a Nottinghamshire born drummer and percussionist, mixes an eclectic range of influences in a drumming style that is musical, melodic and deeply rooted in the Jazz tradition. His inspiration draws on every corner of Jazz history, from traditional and early Jazz styles and New Orleans music to Free Jazz and improvised music, but also Rock music, experimental music, singer songwriters and pretty much anything that makes a sound. Will’s playing style is a charming combination of both the familiar and surprising. Will moved to London in 2010 to study Jazz at the Guildhall School of Music and Drama. After graduating in 2014 he quickly became an in-demand sideman for a startling array of British and International Jazz musicians. The exhaustive list includes Soweto Kinch, Yazz Ahmed, Kit Downes, Nikki Iles, Dame Clio Lane, Alex Garnett, Laura Jurd, Empirical, Ian Shaw, and Jason Rebello, to mention just a few. He played at the East Side with the Rick Simpson / Riley Stone-Lonergan Quartet