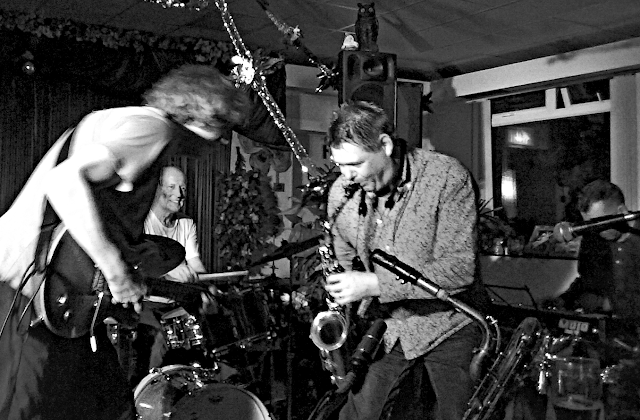 British Jazz Award-winning Derek Nash – bandleader, composer, arranger, record producer and engineer – is one of the UK’s busiest jazz musicians.
He is leader of six bands, each with its own unique sound and featuring some of the top jazz musicians in the UK today.

Derek has been a full-time member of the Jools Holland Rhythm & Blues Orchestra since 2004 and is also a member of the Ronnie Scott’s Blues Explosion.  With these bands, he has enjoyed sharing the stage with many great artists including Tom Jones, Eric Clapton, David Sanborn, Jack Bruce, Amy Winehouse, Michael Buble and Sir Paul McCartney.  He is one of the most in-demand and respected guest instrumentalists for jazz clubs across the UK and has received numerous nominations in the British Jazz Awards.  In the jazz-funk world he has performed with David Benoit, Brian Culbertson, Ernie Watts, Mezzoforte, Nelson Rangell and Don and Dave Grusin.

Derek is a prolific composer, regularly penning compositions for his various bands and undertaking commissions.  He has also composed for television and radio.  As an arranger, and following in the footsteps of his father, Pat Nash (who was an arranger for the BBC Northern Dance Orchestra) Derek has worked for many major artists including Jools Holland, Annie Lennox, David Sanborn, Nile Rogers, Gregory Porter and Chaka Khan.

In addition to his own recordings, Derek has also guested with other major artists including Don Grusin, Jack Bruce, Bob Dorough, Rumer and Shakatak.

As a record producer and engineer, Derek received a gold disc for his work with Jamie Cullum for his ‘Pointless Nostalgic’ album and has recorded some of the leading UK jazz artists including Stan Tracey, Bobby Wellins, Georgie Fame, George Melly, Alan Barnes, Geoff Gascoyne and Digby Fairweather.

John Etheridge rightly enjoys a glowing reputation throughout the jazz world and beyond and has been described by Pat Metheny as, “One of the best guitarists”. He is a prodigiously gifted and creative player whose approach to music can only be described as ‘eclectic’ as he refuses to accommodate or even acknowledge artificial musical boundaries. His range is well illustrated by his years of touring and recording with the iconic Stephane Grappelli while simultaneously doing likewise with the legendary jazz-fusion group, The Soft Machine. John is equally at home on acoustic and electric guitar and his willingness to engage with so many styles is matched by his ability to excel in any of them. He has played with John Williams, Yehudi Menuhin, Dizzie Gillespie, Herb Ellis, Mundell Lowe, Nigel Kennedy, Pat Metheny, Birelli Lagrene, Barney Kessel, Vic Juris and countless others. John’s ability as an outstanding composer is sometimes overlooked but he is often under pressure from audiences to feature more of his own material.