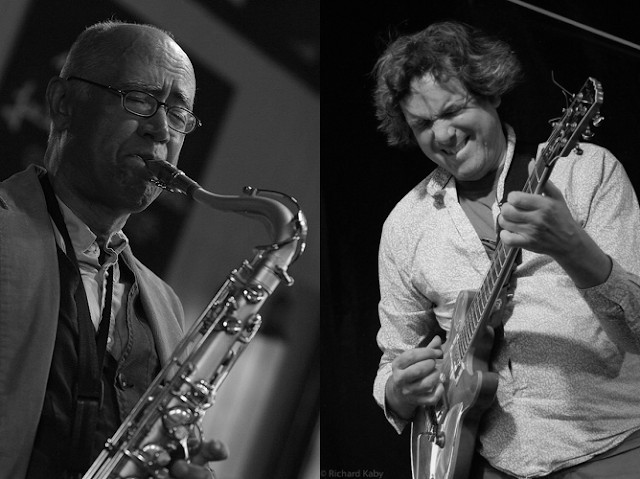 John Etheridge – guitar
Art Themen – sax
Pete Whittaker – organ
Ian Thomas – drums
John Etheridge rightly enjoys a glowing reputation throughout the jazz world and beyond and has been described by Pat Metheny as, “One of the best guitarists”. He is a prodigiously gifted and creative player whose approach to music can only be described as ‘eclectic’ as he refuses to accommodate or even acknowledge artificial musical boundaries. His range is well illustrated by his years of touring and recording with the iconic Stephane Grappelli while simultaneously doing likewise with the legendary jazz-fusion group, The Soft Machine. John is equally at home on acoustic and electric guitar and his willingness to engage with so many styles is matched by his ability to excel in any of them. He has played with John Williams, Yehudi Menuhin, Dizzie Gillespie, Herb Ellis, Mundell Lowe, Nigel Kennedy, Pat Metheny, Birelli Lagrene, Barney Kessel, Vic Juris and countless others.
“If John Etheridge weren’t so brilliant he might be more famous. His versatility is confusing. What other guitarist could have begun his career as a member of Soft Machine and the Stephan Grappelli Quintet?” – Dave Gelly, Observer.
Art Themen, orthopaedic surgeon (now retired) and illustrious saxman, remains a firm favourite on the British jazz scene with a pedigree as long as Southend Pier.

Art was involved in the early British blues movement with Alexis Korner’s All Stars, Jack Bruce’s Band and Long John Baldry’s Hoochie Coochie Men. He has played and recorded with the bands of Michael Garrick, Graham Collier, Don Weller and in 1974 began a long association with Stan Tracey. He also toured and recorded with Charlie Parker alumni, Red Rodney and Al Haig. “Originally a Dexter Gordon and Sonny Rollins disciple..Themen has proved himself remarkably attentive to the saxophone styles of subsequent generations. The atonal whirlings of Evan Parker are evident, alongside John Coltrane’s sheets of sound, and the full-bodied, vibrato-laden rhapsodising of long-gone swing stars such as Coleman Hawkins” – John Fordham, The Guardian.