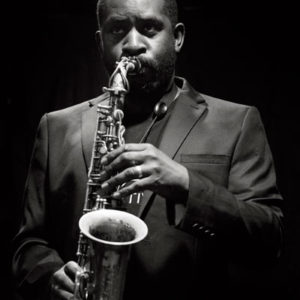 Composer, arranger, producer, musical director and saxophonist Jason Yarde writes music that has been described as powerful, spiritual, evocative, rhapsodic, hair-raising and formidable. Jason began playing alto and soprano saxes with the Jazz Warriors at 16, making himthe youngest ever member of this important band. He was nominated for the Bird Award at the 2004 North Sea Jazz Festival and for the Jazz on 3 Innovation Award for the 2005 and 2006 BBC Jazz Awards. “The highlight was Jason Yarde’s inspired, beautifully constructed arrangement of Footprints, a famous Wayne Shorter tune from the album Miles Smiles” – John L Walters, The Guardian. “Superlative, original altoist Yarde is first call for visiting jazz royalty such as McCoy Tyner, Andrew Hill and Sam Rivers and is also a gifted composer, arranger and producer..” – Time Out.