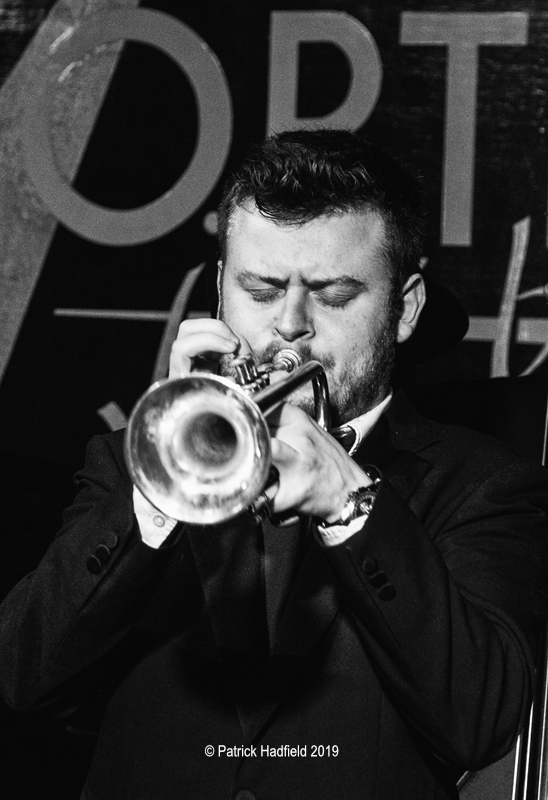 This powerhouse quintet combines a compelling, adventurous ear for melody with virtuosic improvising. James Copus , who is now a regular in Clark Tracey’s Quintet,  is an award winning jazz trumpeter who is rapidly establishing himself as one of the most exciting musicians on the London scene. James studied at the Royal Academy Jazz Course and received the prestigious Derek Watkins award for his performances. The band’s increasingly burgeoning reputation on the international jazz stage was confirmed by first place at the Conad Jazz Contest at the 2018 Umbria Jazz Festival.

James has studied with Till Bronner, Gerard Presencer, Alex Sipiagin and Steve Fishwick and sites all four as major influences on his playing. James has had the privilege of recording and playing with some of the worlds most established musicians including Dave Holland, Joe Locke, Tim Garland, Stan Sulzmann, Gareth Lockrane, Laurence Cottle, Jim Hart, Clark Tracey, Curtis Stigers and many more.

As a session musician and commercial trumpet player, James has played and recorded with the likes of Olly Murs, Pixie Lott, Louisa Johnson, Gregory Porter, James Bay, Basement Jaxx, The Riverdance Company, The London Concert Orchestra (LCO), English Session Orchestra (ESO), Manchester Cameratta, The BBC Big Band, The Guy Barker Big Band and the John Wilson Orchestra. With these various different outfits, he has played at venues such as Wembley Stadium, The Royal Albert Hall, The Barbican and Abbey Road studios. He can also be frequently found playing in the west end.

“Think of all the qualities that make a great trumpeter: a full brassy tone, dazzling runs and immaculate articulation, a range that sends the high notes soaring into the stratosphere, imagination and sensitivity … James has all these and more” The Jazzmann

“It reminded me of Miles Davis’s classic quintet with Wayne Shorter” – the jazzman.com