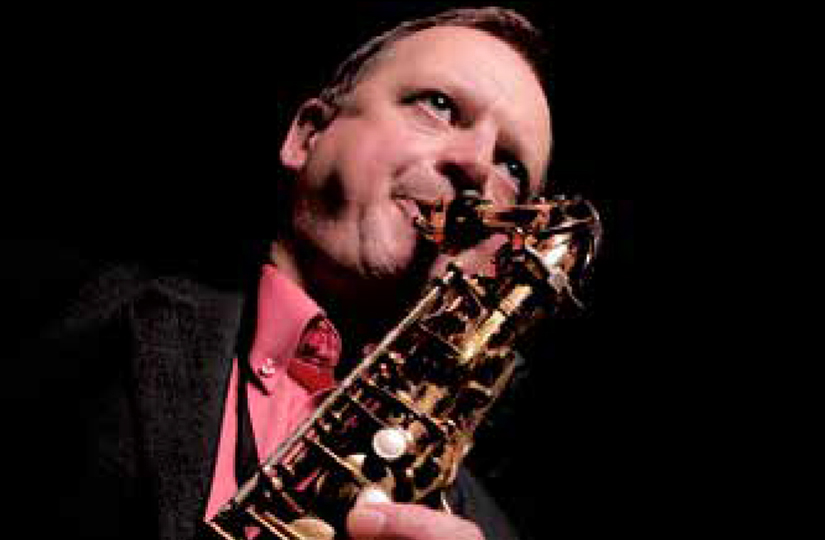 Alan Barnes is usually tagged with the rather unglamorous term “Mainstream”.True, you’re unlikely to find him hanging out with Norwegian experimentalists, string quartets or DJ’s, issuing an album of Radiohead covers or rediscovering the joys of punk rock……

Like Peter King, Barnes is steeped in the language of bop, but is such a consummate stylist that his playing tends to buck any argument that his musical approach is conservative or out of step with the times. Whether on alto, baritone or tenor, Barnes’ melodic sense bypasses the usual scale-running clichés that pepper the playing of lesser bop disciples.

Barnes, plays music that was radical 50 years ago – hard, urban post-bop – but he infuses it with so much passion and energy you could believe it was minted on the spot, which is always part of the story with jazz.

Whatever the instrument, Alan plays it hard and fast and with the sort of inventive flexibility and invention that ensures that he has his own sound and style and could not be easily be confused with another player. And in these days of musical conformity that is quite something.

You might expect something that closely mirrors classic old jazz recordings from an ostensibly orthodox reeds virtuoso like Alan Barnes. But this set has a sparkle that makes it much more than genuflection to the jazz past, even though the material was written by the great and good.

Barnes’s baritone sax swerves between the elegance of a 1930s swinger and Charlie Parker’s double-time flights on Thelonious Monk’s Pannonica; his alto spirals off into free-jazz on the gritty Sonny Rollins title track; his clarinet has a songlike purity on an almost classical account of A Child Is Born. Monk’s Little Rootie Tootie delivers the peremptory accents with a punch that makes you jump, before Barnes’s baritone muscles in. Billy Strayhorn’s Day Dream is sublime, and Victor Feldman’s Lisa is a hurtling swinger into which Barnes fits impossible-sounding turns and swerves.

Another great makeover of the straightahead jazzer’s art.

His stylistic range is quite phenomenal, from Dixieland to post-bop and must be attributed in some measure to an insatiable and lifelong appetite for listening to jazz records.

Barnes plays all the saxophones plus clarinet and bass clarinet. He has a wonderful capacity for suggesting a given style without actually imitating anyone. Johnny Hodges, for instance, is a great favourite with Barnes and he could, presumably, produce a near-perfect facsimile if asked. But what he actually does is to drop a series of feathery, soft-tongued notes in the Hodges manner as a discreet reference and leave it at that. The rest of the solo will be pure Alan Barnes. The ability to inhabit a style in this way, to include it as an active ingredient in one’s own playing, is a rare, valuable and largely unrecognized gift.

On Monday night at the Queen Elizabeth Hall on London’s South Bank, the French drummer Manu Katche was playing next door to the British saxophonist and clarinetist Alan Barnes’s octet in the Purcell Room – with both spaces pretty full. Katche has played with Sting, and his roots are as much in rock as jazz – yet he has played the most oblique and ambiguous jazz too, for Norwegian star Jan Garbarek, the most patiently painterly of saxophonists. Alan Barnes unquestionably has the skill and imagination to play with both Sting and Garbarek too, but neither would invite him – or probably even know about him – and he’d be pretty uncomfortable accepting a request to visit such unfamiliar worlds if it ever did come.

“I thought you’d be in that one,” Barnes said cheerfully to me in the foyer before his Monday gig, pointing at the crowd gathering for Manu Katche’s show. Well, I’d wanted to be at both just about equally, but that’s the catch 22 of the magnificent London Jazz festival: you can’t be everywhere. John L Walters was covering Katche, and I was relishing the prospect of Barnes’s casually consummate musicianship, deadpan humour (he could be a comedian, if jazz ever fails him), and indomitable belief in a respected place for the music’s rich history in this eclectic and often forgetful world.

Barnes is a mainstreamer, a brilliant multi-instrumentalist who’s at home with the jazz repertoire of 30s and 40s swing, and the subsequent “modern” jazz style of bebop. He’s also very much at home in the British jazz environment that preceded the post-70s shift to arts centres, recital halls and cultural funding, with their accompanying new agenda of world jazz and genre-blending. If you Google him, you find a Dallas art-dealer, an Adelaide murder victim and a Birmingham computer scientist coming up long before he does. Yet Barnes is a legend in that British jazz community that rarely gets to Ronnie Scott’s or the Barbican. Barnes spends his life criss-crossing the country, playing provincial jazz clubs and local pubs, endlessly reinventing the song-based lyricism and swing of Duke Ellington’s or Charlie Parker’s music. He’s one of the UK’s key figures keeping the non-metropolitan jazz scene alive, and in the work he does with regional youth bands, he’s a continuing inspiration to the next generation too.

In his surprise that I wasn’t attending Manu Katche’s gig, Alan Barnes was also showing that he knows how different the jazz world he lives in really is – but how necessary it is too. “We’re going to play a piece called Phantasm,” Barnes told his Purcell Room audience. “Part of it’s a fantasy, and the other part …” (taking a long look at his predominantly mature-years audience) “… well, cast your minds back.” I’d also told him that I couldn’t hear his second set because I was doing a runner up to Ronnie Scott’s to hear Chris Potter, the cutting-edge American saxophonist with his powerful avant-fusion underground quartet. “Well, that’ll be fantastic,” Barnes said, without a trace of resentment. He knew all about Chris Potter. Every night until Sunday, the London Jazz festival offers these tantalising choices – and big audiences for this music’s astonishing diversity.